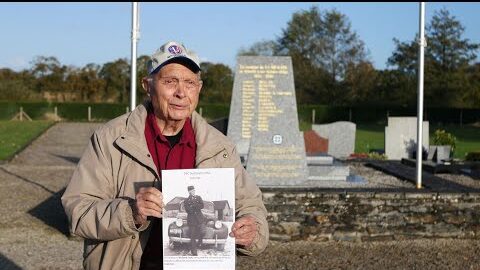 NORMANDY – In November 2019, Ceo Bauer, a former US Army veteran from Ithaca, Michigan, found closure as he returned to the battlefields of Normandy. The trip was made more special for Ceo as Footsteps Researchers helped him to walk in the footsteps of a hometown friend who was killed in action in Normandy on July 14, 1944. ‘For me this is closure. I can die smiling now’, Ceo said on the spot where his friend, Rolland Hill, was killed by artillery shrapnel in the head.

In Honor of Rolland J. Hill and the rest of the 35th Infantry Division

This site uses Akismet to reduce spam. Learn how your comment data is processed.

LEGACY: LOST AND FOUND is a 501(C)(3) arm of Footsteps Researchers LLC. We provide research to help identify lost WWII items and reunites the sacred relic with the veteran himself or his family at no cost to them. We also educate families, school children, and the public about the veteran's sacrifice. In addition to lost relics, we assist grave adopters around the world to preserve the deeply personal legacies of American World War II heroes for generations to come. LEGACY: Lost and Found is a Missouri non-profit 501(C)(3), EIN: 83-1240587.